As a 90’s child, I remember the first bouts of techno music that became mainstream. Songs like “Sandstorm” and “Zombie Nation” were my favorite electronic-beat songs. I like house, electronic and minimal-techno music for what it is, but these ambient beats inspire my creativity. I listen to a variety of house, lounge, techno, electronic and café music to inspire my writing. My first creative connection between electronic music and writing occurred when I moved to the Gold Coast, Australia. At 20 years old, I sat on the beach with my CD player, plastic headphones, Ministry of Sound CD and journal. I reflected and wrote about life, lessons and love.

Those who love house music know “hausmusik” is a “spiritual thing.” I can’t explain how or why, but I feel as if I leave planet Earth listening to this type of music. From a physiological sense, when the brain hears certain frequencies the body responds to the brain’s response. The uplifting, amped-up music has been a part of my daily life as a fitness instructor and personal trainer.

Interestingly, I did not realize until I moved to Germany that my favorite DJ’s are German. Somehow, it doesn’t surprise me, as Germans have been techno-leaders ever since my diaper days. Germans produce some of the best electronic music on the market.

But, why are German DJ’s so good? I don’t know the exact answer, but I only blame the German perfectionist culture. Is it in their DNA to listen and mix tracks until they are perfect? Maybe…but until I discover the answer, these are my favorite German DJ’s.

In January, I went on a “Timewriter binge.” Now, living in Europe, I had to research this mysterious DJ. The Timewriter is Jean Cochois from Silent Chamber, Germany. I laughed at the German commonality and prayed to the universe for him to perform live in 2015.

The Timewriter has been producing since the 90’s. Hands down, he’s my favorite DJ alive and I would “die” to seem him perform live. His house and deep house music transcend my mind to a different dimension. His songs make me feel like I’m chilling at a beach where others transcend me to a center of a rave party. When I am down in the dumps, I listen to The Timewriter. His music reminds me that every breath of life is magical and beautiful.

The first songs I heard of his were, “Handsome Machine” and “Love is Beautiful.“ After hearing these tracks years ago, I became hooked and addicted to the Timewriter. My favorite tracks include “Morning Prayer,” “I Love Deep,” “Flicking Pages” and “Vintage Circuits.” I love every track The Timewriter produces, and unable to link every favorite track. He has an ear and soul for house that not many produce his style and quality of music. 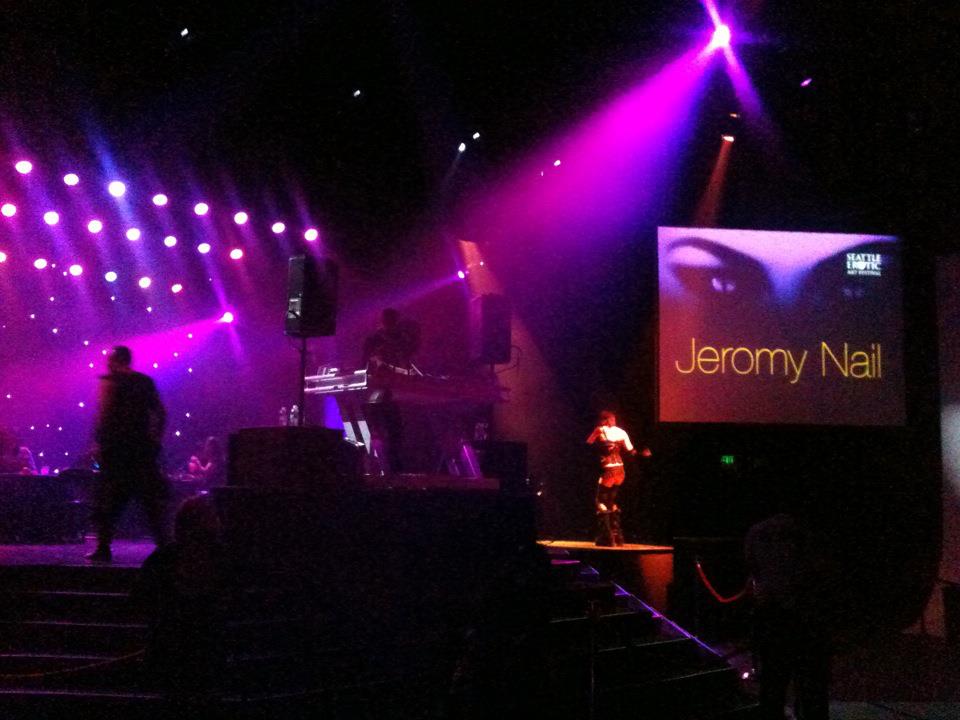 I’ve seen his live performances as See Sound Lounge in Belltown, Seattle and loved every beat produced. Upon listening to Nail, I instantly heard a difference in music compared to many local US DJ’s. Besides spelling his name Jeromy, instead of traditional Jeremy, I knew he had to be foreign. I discovered Nail was a German native. I believe it’s the inner-German instinct that shines in his mixes. Jeromy has a laundry list of songs on his soundcloud.com, including another favorite mix performed at Seattle’s popular Italian lounge; Barolo and “Tell Me” remix. Hands down, Nothing’s True is my favorite track, which transcends me to Cloud 9 every time I hear it.

Tube and Berger
When I first heard Tube and Berger’s “Imprint of Pleasure” and “Surfin’” my soul reincarnated countless memories of the Australian ocean. Deep, sensual and airy vibes integrate to concoct unbeatable tracks. This German duo met as youngsters as bus mates and later broke into the DJ scene in 2004 with uplifting vibes. Intricate, emotional and inspiring are the only ways I can describe T&B.

I remember one day playing “Imprint of Pleasure” for an hour straight while trying to convey my voice in my “Finding Om” manuscript.

Booka Shade
Booka Shade is a German house music producer consisting of duo, DJ veterans, Walter Merziger and Arno Kammermeier. Like Tube and Berger, I became addicted to BS after hearing popular tracks, “Body Language,” “Regenerate” and “In White Rooms.” I did not know until recently Booka Shade is German and now I understand why their sets are some of the best I’ve ever heard. Booka Shade’s music inspires my contemplative thoughts and pushes me to dig deeper with my writing.

The Mysterious Kurt 16 DJ
My first weekend in Hannover introduced me to another favorite German DJ. Josh and I walked past this hotel bar where blue and pink lights flashed on a Saturday night. We walked inside Kurt 16 to find it was, “Haussmann” DJ night.

I have no idea his name or who he is, but this guy plays serious house and deep house tracks. The hotel bar is a “pregame” for the nightclubs. The hausmann lounge-house tracks make you feel as if you are sitting in the French Riviera watching the sunset. His mixes are deep and airy at the same time, which goes along with Kurt 16’s “earth, air, fire, water-inspired” menu. Kurt 16 is my favorite place in Hannover. House night used to be every Saturday, but has recently switched. You can see the “haus” DJ’s perform at Kurt on the first Saturday of every month from 8-11:00pm.

So to whomever the DJ is, I would like to know who you are and if you sell your music!

Eliza Feliz
As a woman who strives to make it “big” in male-dominated industries, I am ashamed that Eliza Feliz is the only German female DJ I know. I ran across Eliz’s soundcloud page a month back and fell “head over heels” with her “Hello Spring 2015” set.

The first ten minutes of this set make me feel as if I am dancing on the moon overlooking a sea of sunshine. Eliza reminds me the best of Spain and Germany. She has the German quality and beats while subtly integrating “sun, sand and sea” Balearic tones that remind me of Spain. My other favorite set is her, “Zwischen Land und Meer #8” set.

I love Spain, Germany and the ocean so I appreciate her music. As a female, I hope to see more female DJ’s enter the industry.

Mario Aureo
I first saw Mario, Berlin-based DJ, in Hannover, Germany on Christmas Eve 2014. He played at Lux’s Linden Lounge. A week later I saw him perform at Hannover’s Kiste nightclub where he played before big-timer, Timo Mass.

His mixes inspire my “side step” dance and my creativity. Impressed with his live performances, I avidly follow his soundcloud.com account. My favorites include “Decay” remix and “Five Years Lost” mixes.

Timo Mass
Surprisingly, I never heard of Timo Mass until I moved to Germany. Thanks to Hannover’s MagaScene, Kiste nightclub promoted the “X-Mass” event. Who is this Timo Mass?

After Googling his name, Timo has a lineage of popular performances. Ibiza nightclubs, Time Warp – this big timer is a big name in the electronic world.

After Mario played, Timo set the stage with his tracks, which made the crowd fist pump and shout. He stood there, looking ever so cool, with his bushy hair and a cigarette burning between his lips. He calmly mixed tracks, including my favorite, “The Tree,” song, which sent my soul to the ethers. Timo’s YouTube and SoundCloud tracks are popular including one of my favorite sets of him performing live at Cats and Dogs Club in Tel Aviv.

Atlantik
In Hannover’s MagaScene, I read about a Berlin DJ playing in Hannover. On a cold December night, I went to Bei Chez Heinz to listen to Atlantik. I walked in the basement to find a traditional German-style underground club. Couches, manikins, rocking horse and eclectic art decorated the walls. We sipped on Gluwhein, chatted with the bartenders and admired the Berlin-inspired decor.

Atlantik’s music matched the underground atmosphere with deep techno. I discovered more deep-and-dark tracks on soundcloud.com. My favorite live tracks inspire deep thoughts I need for my manuscript writing. Atlantik’s Live at Feines Tier and Live at Sisyphos are my favorite sets. 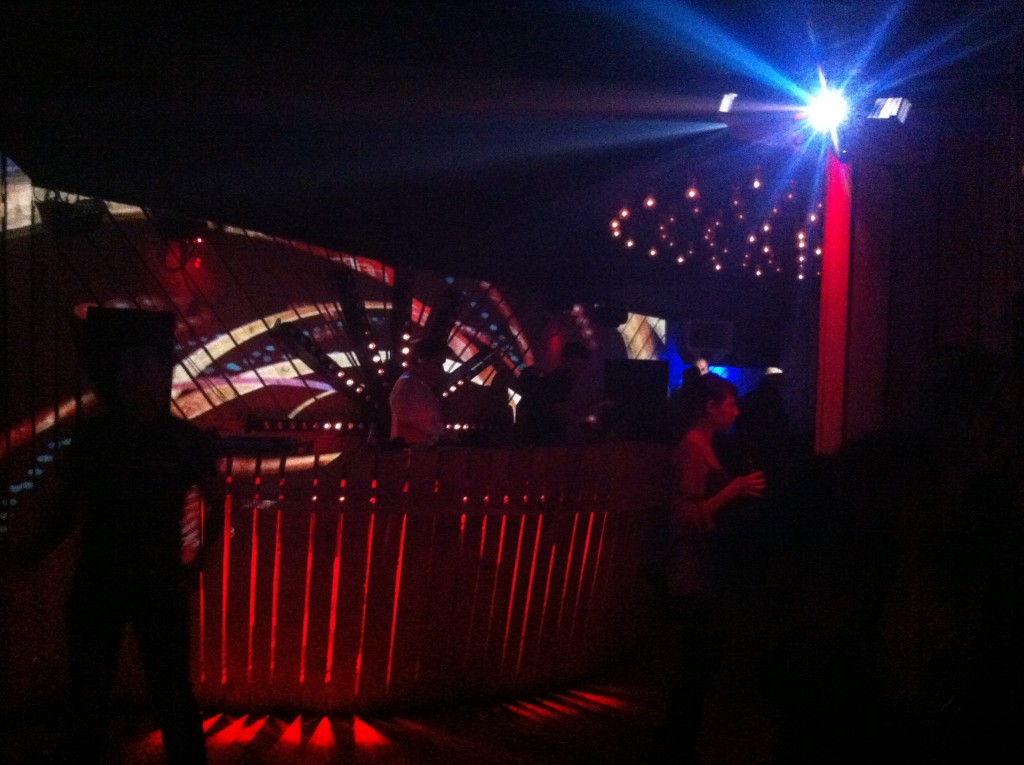