Several years back, my husband hosted four Germans on a fellowship in Seattle and met with high-up city and business officials. The one fellow, Stefan from Oldenburg, told Tacoma city officials about the town’s annual cabbage festival and celebration. A cabbage festival sounded, “so German,” and a bit “cheesy.”

Several years later, I now experienced one of the most delightful German celebrations, a Grünkohlfahrt. Kohl means, “cabbage.” Grünkohl, directly translated, means, “green cabbage,” but Americans know it as kale. Fahrt means “ride or tour” not a gaseous experience caused from over-eating too much fiber.

So what sounds a gas-emitting, “kale-farting” experience requires stamina and hungry stomachs. During the winter months (mainly during February), Northern Germans congregate with a wagon full of alcohol and food and walk countless kilometers playing drinking games before ending the night with an over-sized, German meal. The tour happens rain or shine.

We loaded the Deutsche Bahn train and made way to the countryside town, Rotenberg. The crisp winter air slightly whipped as the beaming sunrays shined above a wagon filled with beer, schnapps, cheese, crackers, chocolate and gummies. Host and creator of the Grünkohl tour, Jürgen, sarcastically handed me the wagon’s handle with excitement to pull the sleigh the first 10 kilometers. 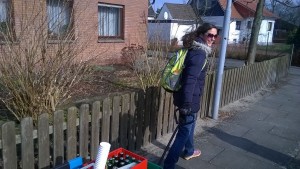 Walking over tree roots, puddles and curbs, I carefully guided the wagon with hopes of not breaking any bottles. After 20-minutes of walking, Jürgen noticed a blue “X” on a tree, which was the first “drinking marker.” He pulled out a bottle of berry-flavored schnapps and filled our disposable shot glasses.

Since I do not drink I patiently sipped the concoction, “accidently” spilling the excess over the lid. We proceeded to walk and I handed the wagon over to friend, Sid. We walked through the countryside and admired Germany’s geography. The landscape reminded me of natural areas in Ohio.

After several drinking stops and the opportunity to binge on cheese cubes, we passed another Grünkohl tour group. Larger in size, that group played the traditional method of rolling a ball down the street, which humorously found the group trying to roll the ball out of a calf-deep water from a ditch.

The group approached the first “game stop.” The winner of this game would be revealed at the end of the night for a special prize. We played a “tea bag” game. This included dunking the tea bag in water, standing at a starting point, squatting and plunging the tea bag overhead. The goal is to get the farthest distance. 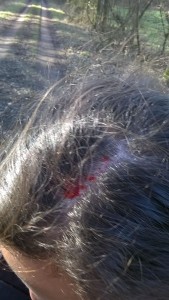 Results from my Tea Bag Experience

I thought my athletic abilities would easily win this game. I stood at the line and gripped the tea bag’s string between my teeth. I gained momentum and flung the bag over my head. I felt a smack on top of my head and noticed my tea bag landed less than three feet away from my body. I placed my fingers on top of my head and questioned, “Am I bleeding?” The hibiscus and fruit-flavored tea perfectly decorated my head as if I get hit over the head with a 2×4 board. Disappointed, my team earned the longest distance, which meant, “winners choose what schnapps they want to drink.”

After more walking and drinking, the second game approached. This required one man to hold an egg in his mouth and sing songs. The singer had to be careful because if he clamped the shell he would gush raw egg in his mouth. The team had to guess the name of the song. On my team, Josh held the egg and easily zipped through the songs. Once again, my team guessed all five songs in the shortest amount of time, which meant, “winners choose what schnapps they want to drink.”

Moving on, the cheese and crackers ran out, while we munched on gummies and chocolate. The final game included two people holding one raw noodle in his or her mouth. I held a spaghetti noodle and my partner, , held a hallow spaghetti noodle. The goal was to get the spaghetti noodle inside the hallow noodle. 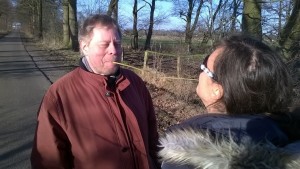 Trying not to laugh, I watched the spaghetti noodle quiver and rapidly flick up and down. My partner stood perfectly still with focus and control. I started breathing heavy since I wanted to bust out in laughter. My noodle looked like a sword battle flicking left, right, up and down. My team lost and were “not allowed” to drink that round.

After 12 kilometers, we finally approached the house where Jürgen fed me water and everyone else beer. With ferocious appetites we were treated to a smorgasbord of kale, potatoes, meat and vegetarian meat. Jürgen and his wife cooked the kale without the meat bones to honor my vegetarian lifestyle.

The beautiful part of German food is that everything is simple. Boiled potatoes in slightly salted water were some of the best potatoes I consumed. I mixed my vegan schnitzel with kale and consumed this hearty meal with a smile. 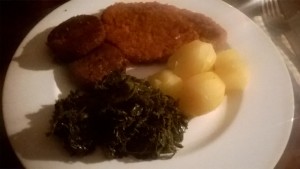 During dinner, the tea-bag winner, Sid, was announced. His special prize included organizing the next winter’s grünkohl tour. He’ll be in India, so maybe next year you’ll find us in Goa, India dragging a wagon around the sandy shorelines. We thought about adopting this experience in America, but realized we would get arrested for open containers and public intoxication.

I find it ironic that kale is one of the biggest “super foods” in the states. One of my clients once gave me an article about Heidi Klum and her dietary choices. She claimed that she hates eating kale salads but does it because its healthy for her. My mind does not understand eating something that one hates, but I realized kale is delightful, especially cooked. 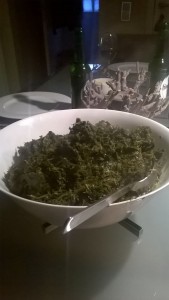 Germans have been eating, consuming and celebrating kale for years. Eating kale “because the celebrities do” is a foreign concept. Kale comes from the earth and is a local, healthy vegetable. How amazing is it that a culture celebrates a vegetable with seasonal festivals and carefree drinking games?

Personally, I think its amazing and reinsures the notion that no matter how trendy something is with celebrities, somewhere in the world people have “used that trend” longer than Kim Kardashian has been alive. Until next time – Happy Kale-ing to you and your dinner plate!