In September 2012, I stepped foot into a foreign world of freedom and liberalism – German’s drinking culture. I arrived to Berlin after visiting Warsaw and Krakow Poland and Auschwitz. After reviewing the brutal mess of the 1940’s, I did not know what to expect.

I noticed the young Berliners rebelling against conformity, wearing black leather and starting parties in every public realm. I thought, “What is this place?”

I walked the streets and everywhere I looked Germans were partying under the moonlight. S-Bahn trains, train stations, bridges, street corners and in pedicabs – open container drinking happened everywhere. 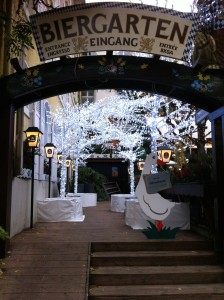 Now, drinking in public seems normal. I don’t drink much, but I do like to party and dance the night away. When I do drink it’s either a special occasion or a long night out listening to house music and watching a DJ turn tables. So, what makes Germany’s drinking culture unique?

Here’s the caveat, drinking in Germany is controlled. When I am not drinking, I am people watching. Over the last five months, I have watched thousands of people drink responsibly in public. Germans enjoy life; they drink alcohol in public spaces and act like normal human beings. They consume alcohol like its water. They are not bonging beers or “causing a muck” from slamming ten shots in 30-minutes. Drinking is a slow and special process to make the night last with a hardcore buzz.

Germans have excellent constitutions and can consume boatloads of booze without seeming messed up. Yes, there are some instances of chaotic frolics where some idiot punches a window because their soccer team lost (this stuff happens around the world). It’s just different.

Drinking in public ignites a sense of freedom, trust and liberty to exist in a stressful world. No one puts them down for consuming alcohol, but rather joins in the fun. Beer gardens (bier gartens) are most known in Germany for public consumption. These gardens are the fuel for the hot summer sun’s fire. However, beer, vino and champaign are enjoyed everywhere at anytime of year. 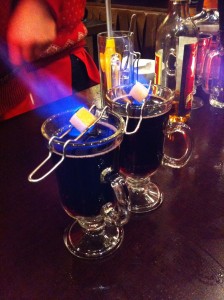 This also includes the hot, winter mulled wine known as “Glühwein.” During the Christmas season, hundreds of Kris Kringle stalls flood city streets serving fresh cups of this red or white concoction. Germans roam the streets staying warm with a seasonal cup of cheer. It’s an epic experience, which enhances the glittery winter wonderland atmosphere. From 10am to 9pm, people of all ages enjoy Glühwein as they would a café latte – morning, noon and night. But, this enlightened atmosphere is remarkably special because the residents are given the freedom to drink and be merry.

I find this “freedom” admirable, especially when reflecting on the lack of freedom experienced during college years. A common debate in America questions, “You can own a gun at 18, but can’t drink a beer until 21?”

After five months in Germany, I can’t imagine a life where people are confined to drink within a gated garden or between four walls. On some subconscious realm, life seems restricting and limiting. It’s interesting how a culture’s alcoholic freedom makes one probe at deeper questions in life.

My next post will have more information about this topic. Have you ever heard of a Grünkohl tour? If not, you’re about to find out what it is! What cultural differences have you found that make you probe deeper questions about life?